I grew up hearing my grandmother–God rest her soul–sing along as this hymn played on her radio but I was NOT feeling it, even though it burned itself into my subconsciousness.  Now that I find myself holding an area rug against a window to keep it from blowing in, singing that refrain is one of the few things comforting my spirit at this terrifying moment in my life.

When I sat down to write in my journal as Hurricane Irma descended upon St. Thomas, I was clearly in a state of denial.  I’m not sure why I thought I would make ‘constructive’ use of my time as a natural disaster made its way to my doorstep. Well, that was abruptly cut short as I heard one of the curtains in the living room get whipped down from the window.

Island lore has it that leaving a slight space for wind to blow through windows during a hurricane will prevent the buildup of pressure that causes the roof to get torn off and/or the entire window get blown in.  Physics was never my thing so I can’t say whether or not that is true, but some people who follow that advice still lose their roofs while others swear by it. I’m guessing that the trajectory of the storm and the condition of the roof have greater bearing than simply leaving windows ajar, but I digress.  My mom and I watched as the remaining curtains that stayed up looked more like flags, flying horizontally in the wind, ushered by cold rain that crept across the tiles.  Oh, another note about life in a hurricane-prone area: ceramic tile is the floor treatment of choice for anyone who previously endured water damage in a home with wall-to-wall carpet.  The mold, smell, and effort to rip it out is NO fun.

We started mopping furiously–first in the living room, then in Mom’s bedroom, then in my bedroom… eventually we just stopped mopping and started sweeping it up. Yep, just what I said–there was so much water on the ground that it became easier to sweep it into a dustpan and dump it in buckets than hand-wringing it from the mop.  In addition to the rain riding in between the louvers on Irma’s gusts, several leaks in the ceiling made their presence known. We recruited every available receptacle to collect the drips; and then waterfalls happened.  By this point, we knew that the roof above was severely damaged because the water went from dripping to free-falling on the floor and streaming down the walls. Fatigue and common sense convinced us both to quit trying to mop/sweep it up and just wait until the storm was over. Besides, we had to scramble to move loose items on the ground even though part of our pre-hurricane preparation protocol was to stow some things above our closets in case of flooding. Welp….. 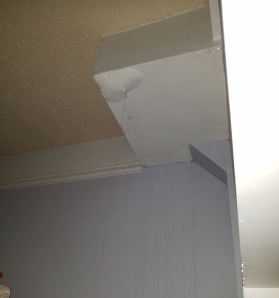 All of this happened sometime between 1:00-5:00 pm, which was when the forecast predicted that the brunt of the storm would be felt. Honestly, I was thankful that Irma happened during daytime hours. The last major hurricane to hit St. Thomas (Marilyn in ’95) passed overnight, VERY slowly.  Back then, nothing was more torturous to me than hearing and feeling but not being able to see the chaos that was being unleashed outside. At least this time around, even though it was terribly overcast,  my visual cortex was drinking in the disturbingly marvelous events taking place around me. Akin to the solar eclipse that happened only 2 weeks earlier, this natural phenomenon shouldn’t be looked at directly for one’s own safety. Even while keeping the danger of projectiles being hurled through windows in the back of my mind, I had to peek outside… it was surreal! Heavy duty debris was whirling about in sustained winds of over 100 miles per hour like a loose tissue on the ground in a Sunday afternoon breeze. Vehicles rocked to and fro, bouncing on their tires despite parking brakes being firmly applied. Densely foliaged tree branches rolled across roadways as if they were measly tumbleweeds.

Suddenly, one of the screened and glass-lined rectangles in the wall separating my mother and me from the ferocious tempest roaring outside was compromised…. desperate prayer = ACTIVATED!